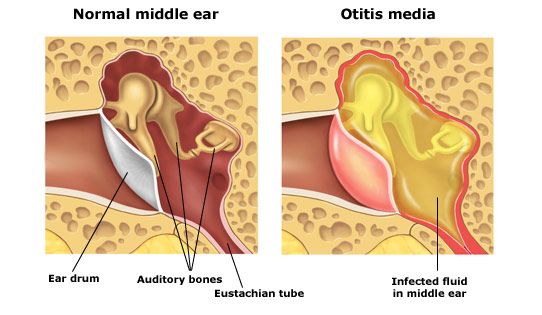 Ear infections are common in babies and small children and can be very painful. They are usually divided into those which occur in the ear canal (otitis externa) and those which occur in the small space behind the eardrum (the middle ear). The middle ear space can sometimes become filled with mucus (fluid), often during a cold. The mucus can then become infected by germs (bacteria or viruses). Children with glue ear who have mucus behind their eardrum are more prone to ear infections.

A chronic ear infection can be more destructive than an acute ear infection because its effects are prolonged or repeated, and it could cause permanent damage to the ear. A chronic long-term infection may show less severe symptoms - so the infection may remain unnoticed and untreated for a long time.

Symptoms of an Ear Infection

How The Salt Clinic Can Help

Salt Therapy is a clinically proven natural, safe and beneficial method of treatment for every age group from 6 months old. Our medical device can help to:

How Often Should You Attend

Strictly necessary cookies
These cookies are essential for visitors to be able to browse the website and use its features. None of this information can be used to identify visitors as all data is anonymized.

Currency
Purpose: To be able to show prices in the currency matching the visitor's preferences.
Duration: 30 days.

Google Recaptcha
Purpose: To be able to validate whether the visitor is human and to limit the amount of spam from contact forms.
Duration: 1 year.
Provider: Google.


Third-party cookies
These cookies collect information about how visitors use the website, like which pages they've visited and which links they've clicked on. None of this information can be used to identify visitors as all data is anonymized.

ga
Purpose: Registers a unique ID that is used to generate statistical data on how the visitor uses the website.
Duration: 1 year.
Provider: Google.

gid
Purpose: Registers a unique ID that is used to generate statistical data on how the visitor uses the website.
Duration: 24 hours.
Provider: Google.

We also integrate with social platforms on this site that allow you to connect with your social network in various ways. Social media integration will set cookies through the website which may be used to enhance your profile on social media sites or contribute to the data they hold for various purposes outlined in their respective privacy policies.